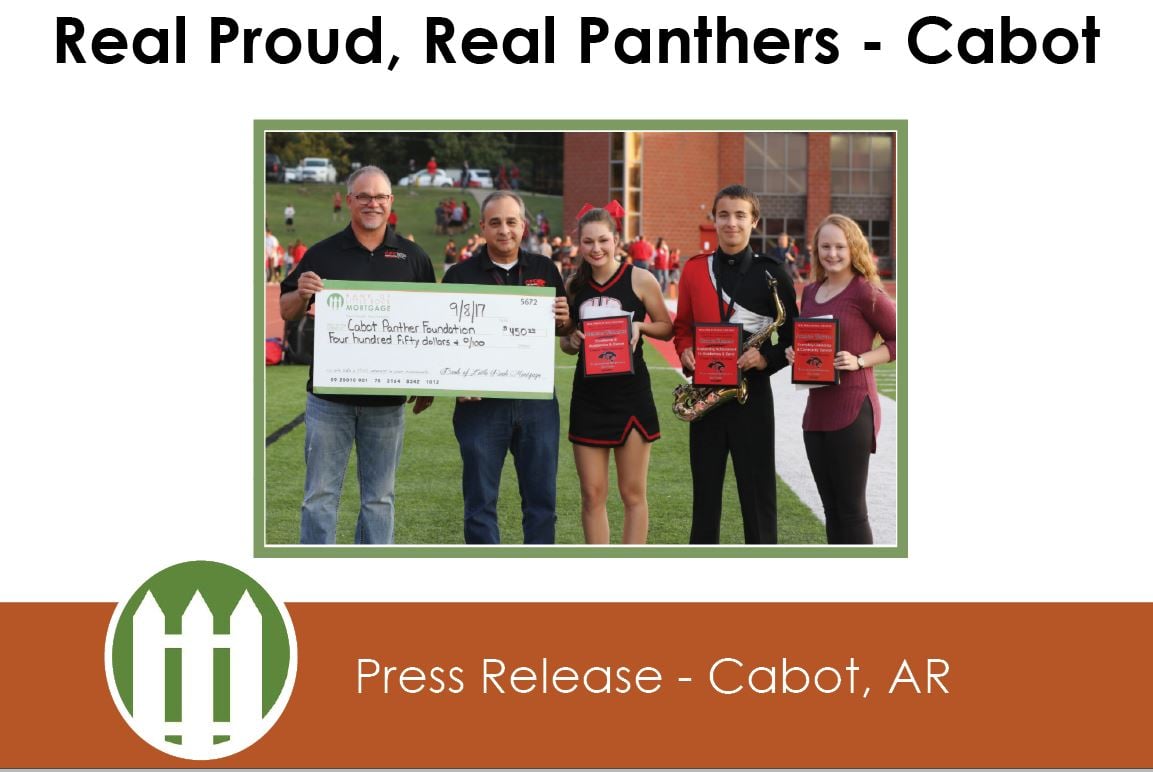 Three Cabot High School students were recognized by Bank of Little Rock Mortgage on Friday, September 8th, during Cabot’s varsity football game against El Dorado. The students were honored as a part of the Real Proud of Real Panthers program, sponsored by Bank of Little Rock Mortgage. The program recognizes students for their achievements in an out of the classroom. The students honored were Adrianna Winstead, Meagan Wallace and George Guzman.

Adrianna Winstead is an outstanding leader in the Air Force Jr. ROTC, serving as its Executive Officer.  She has received more than 14 awards for AFJROTC activities and maintains a 3.46 GPA.  Adrianna is also an active community volunteer.  She plans to pursue a commission in the US Air Force.  Adrianna is the granddaughter of proud grandparents, Joe & Susan Purchase.

Meagan Wallace is described by her teachers as a great leader.  Her GPA is 3.85 and she is involved in many campus clubs, including being Captain of the Dance Team.  Meagan attended Governors School and Girls State.  After high school, Meagan plans to attend Hendrix College & major in biology.  Meagan is the daughter of proud parents Michael & Linda Wallace.

George Guzman is outstanding member of the Cabot Band, playing in the Symphonic Band, the Wind Symphony and Marching Band.  George maintains a 4.0870 GPA and participates in many student clubs, including Mu Alpha Theta and the National Honor Society.  George attended Boys State and the US Naval Academy Summer Seminar.  George plans to attend the US Air Force Academy.  He is the son of proud parents Willie & Gillian Guzman.

Dr. Brent Larsen from the Cabot Panther Foundation, accepted a $450 contribution, which is part of the $2,700 Bank of Little Rock Mortgage will donate to the foundation during this school year.