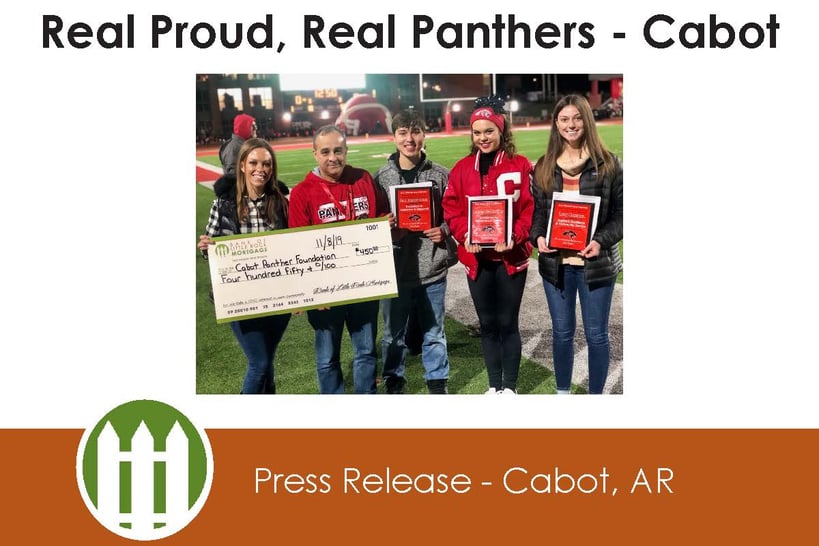 Three Cabot students were recognized by Bank of Little Rock Mortgage on Friday, November 8th, during the Cabot High School football game. The students were honored as part of the Real Proud of Real Panthers program, sponsored by Bank of Little Rock Mortgage. The program recognizes students for their achievements in and out of the classroom.  The students honored were Bill Armstrong, Lauren Undernood and Lexi Griebel.

Bill has a 4.04 GPA and is a member of Stagecraft, National Honor Society and National Science Honor Society.  His teacher describes him as dependable, hardworking, dedicated and a leader among his peers.  He referees for flag football and is a member of Fellowship Bible Church youth group.  After high school, Bill plans to attend the University of Central Arkansas and major in Veterinary Science.  Bill is the son of proud parents William and Kimberly Armstrong.

Lauren has a 3.92 GPA and is captain of the dance team, a member of National Honor Society, Fellowship of Christian Athletes, Theater Dance and Junior Civitan. She volunteers at the Cabot Christmas Alliance, Lunch Box Connection, animal shelter and Arkansas Angels Pageant.  After high school she plans to attend the University of Central Arkansas and major in Speech Pathology.  Lauren is the daughter of proud parents Wesley and Melissa Underwood.

Lexi has a 3.8 GPA and is a member of National Honor Society, Sidekicks and Camp Alex, a summer camp for teens who have lost someone to suicide.  Her teacher describes her as a super sweet young lady who is driven to succeed and has always strived to be a friend to everyone.  After high school, Lexi plans to attend the University of Central Arkansas and major in nursing.  Lexi is the daughter of proud parents Eddie and Lori Griebel.